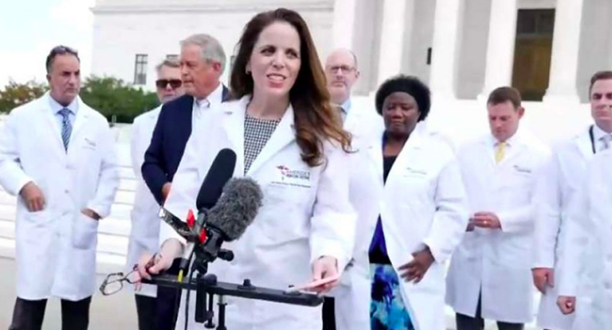 A Beverly Hills doctor who’s publicly criticized the coronavirus vaccine and advocated for hydroxychloroquine as a treatment against the deadly virus has been arrested in connection with the Capitol riots. Dr. Simone Gold, 55, was among three Los Angeles residents who were arrested on Monday.

Gold garnered national attention in July when she organized a press conference on the steps of the U.S. Supreme Court to condemn pandemic lockdowns and rave about how “hydroxychloroquine works” as a treatment for COVID-19.

The doctor made a similar speech during the Jan. 6 insurrection, confirming to The Washington Post she was photographed holding a megaphone on the Rotunda floor.

Along with Gold, federal officials also arrested John Strand, communications director for America’s Frontline Doctors, who was pictured with the physician at the event. Gold joined the mob that stormed Capitol Hill in an attempt to disrupt the 2020 election certification process.

She spoke at protests in Washington, D.C., leading up to the riot, casting doubt on the vaccines and claiming that COVID-19 is non-fatal. Gold stated that citizens must not comply with taking “an experimental, biological agent deceptively named a vaccine.”

Here is Dr. Simone Gold giving an impromptu speech inside the building at the #DCRIOTS
Her partner, John Strand, stands back and films the erratic display.

The evidence that led to the arrest of Dr. Simone Gold and John Strand. Well done! @Autre_Vierge pic.twitter.com/9WgqGWL5mp

ARRESTED: Dr. Simone Gold, 55, from California was fired months ago for false and dubious claims related to the pandemic. Here she is at a rally in DC leading up to the terrorist attack at the Capitol. pic.twitter.com/LYbW8ilgN1

Dr. Simone Gold, 55, was among three Los Angeles residents who were arrested on Monday in connection with the insurrection. Gina Bisignano, the 52-year-old owner of Gina’s Eyelashes and Skincare, and 37-year-old John Strand are also facing charges. https://t.co/fxHrLl9Pu8