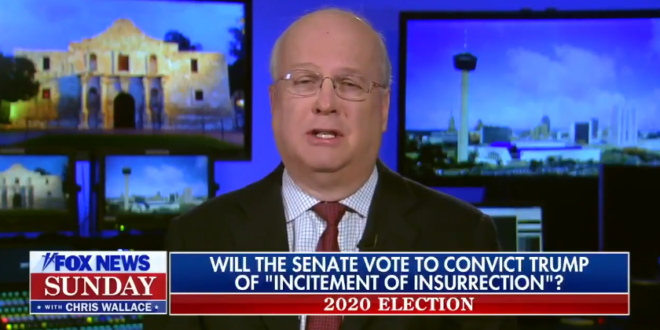 “Rudy Giuliani charted a very bad course for the president in the morning papers when he suggested that the argument was going to be, ‘Well, there couldn’t have been incitement because all the charges of widespread voter fraud are true,’” Rove sighed.

“Well, those charges and the so-called experts that the campaign has mustered to advocate them have been rejected by over 50 courts, with judges appointed by President Trump, President Obama, President Bush, President Clinton, and I think even one Reagan justice.”

“If it’s the Rudy Giuliani defense, there’s a strong likelihood that more than 17 Republicans will, because essentially that argument is: ‘This was justified, the attack on the Capitol and the attempt to end the congressional hearing on certifying the election was justified because all these charges are true.’ And frankly, they aren’t,” he added.

Mediaite has another Rove quote:

“It’s going to be an ugly several years before the Republican party can put itself back together. It needs to rebuild, it needs find a way to take the traditional Republican coalition and bring in and keep as much of the Trump voters, the ordinary voters who cared about him taking on the establishment and taking on the elites on the east and west coast. But the Republican party — let’s not kid ourselves, it is the midst of the civil war.”

Karl Rove says on Fox News that if Rudy Giuliani defends President Trump in his impeachment trial, there is a “strong likelihood” that Trump will be convicted.