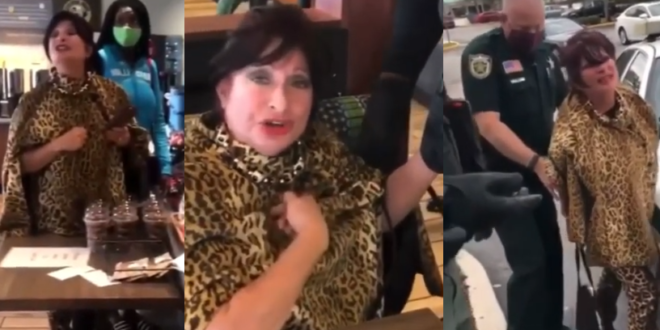 IN THE NAME OF JESUS: Screaming Covidiot Busted At Bagel Shop, Accuses Cops Of Trying To Steal Her Purse

Falco-DiCorrado, who on social media has referred to the COVID-19 crisis as a “scamdemic,” now is invoking a religious exemption to wearing mask. She said, as a minister, she was at the bagel shop with a woman she was counseling.

Falco-DiCorrado spent the night in jail and was released Friday afternoon. “It was an unbelievable horrific experience,” she said, adding that she had “no idea” she could get arrested. Last September, she participated in a protest inside a Fort Lauderdale Target, hollering to shoppers, “Breathe! You’re Americans, breathe!”

According to the arrest report, when deputies went into Einstein they saw Dicorrado “standing in front of the counter screaming loudly at customers and employees” and shouting “I am not leaving that is discrimination.” When an officer asked her to step outside, Dicorrado refused, starting quoted “Constitution codes and discrimination statutes” and screamed at the officer, the report said.

The incident began making the rounds with video postings on social media. “Get your hands off of me. You are kidnapping me,” she is heard yelling at the officer. On May 30, 2020, Dicorrado was arrested and charged with trespassing and resisting arrest while protesting the wearing of masks while in a parking lot outside a Sunshine Market in West Palm Beach.

"Trump Girl" DiCorrado testified twice against mask mandates and COVID-19 "Plandemic," said public officials were scaring "certain masses and ethnicities" like "Latinos and our darker shades of brown skin," called herself "minister of the gospel of Jesus Christ." #BecauseFlorida pic.twitter.com/GWbHF0Rvh0