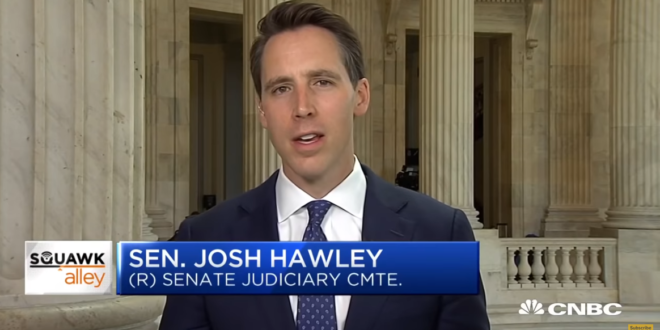 Sen. Josh Hawley Monday slammed the Democratic senators who filed an ethics complaint against him and Sen. Ted Cruz over their Electoral College objections on Jan. 6 — and continued to defend his decision to object to electoral votes during the joint session to certify President Biden’s Nov. 3 win.

In one of the letters, Hawley, R-Mo., called for the Senate Ethics Committee to investigate the seven Democrats who filed the complaint against him and Cruz, R-Texas, accusing the senators of filing “an unprecedently frivolous and improper ethics complaint… [w]ithout citing any relevant evidence or offering any good-faith argument.”

“In light of the shameful abuse of the ethics process…I have considered whether I should call for you to resign or be expelled from the Senate,” Hawley writes in his letter to the seven Senate Democrats. https://t.co/RfycJTCOTI

Josh Hawley Flips the Script, Calls for Ethics Investigation Against Democrats Who Filed Complaints Against Him https://t.co/KRlGw7piCP

Sen. Josh Hawley filed a counter-complaint with Senate Ethics this morning against the 7 Senate Dems who had previously filed a complaint against him and Sen. Ted Cruz over their objections to the results of the 2020 election https://t.co/UoGQkThGe2