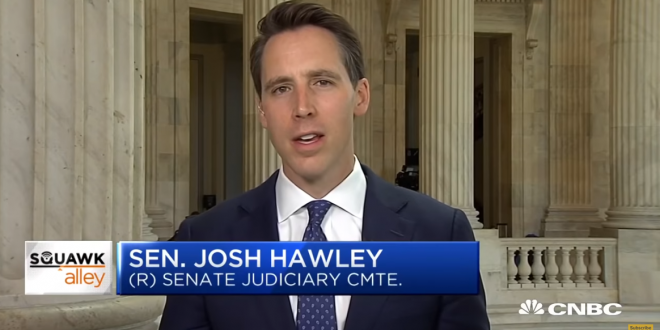 Missouri U.S. Senator Josh Hawley said his family was targeted by vandals and protesters late Monday evening. Hawley, who has been a leading voice in the effort to hold up Wednesday’s certification of the Electoral College vote, sent a tweet that his wife and newborn daughter were at their home in the Washington D.C.-area when a group approached the residence and made threats.

ShutDownDC, the group that organized the protest, livestreamed the event. The 51-minute video shows a group of at least a dozen protesters gather in a strip mall parking lot before walking to the Hawley family’s home. Once there, the group stood on the sidewalk and front lawn for the duration of the demonstration. At one point—minute 29 in the video—three protesters take a pocket copy of the Constitution and place it on the front door of the Hawley residence.

Despite Hawley’s claim, there doesn’t appear to be evidence that protesters tried to “pound open” his door and nothing was vandalized. According to the above-linked report, he was not home at the time. The group chanted “shame” and wrote with chalk on the public sidewalk. Below is the full live-stream posted by the protesters, who are not affiliated with antifa.

Tonight while I was in Missouri, Antifa scumbags came to our place in DC and threatened my wife and newborn daughter, who can’t travel. They screamed threats, vandalized, and tried to pound open our door. Let me be clear: My family & I will not be intimidated by leftwing violence