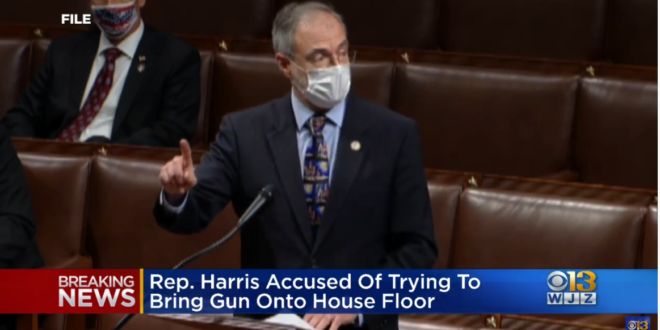 US Capitol Police are investigating an incident in which a Republican lawmaker was stopped from bringing a concealed gun onto the House floor on Thursday, sources told CNN, the first time a member of Congress has been discovered with a firearm by the metal detectors now set up outside the legislative chamber.

Rep. Andy Harris, of Maryland, set off a metal detector outside the House floor on Thursday and an officer soon discovered it was because he was carrying a concealed gun on his side, a Capitol official told CNN. The officer sent Harris away, prompting him to ask fellow Republican Rep. John Katko, of New York, to hold his weapon.

According to a press pool report, Katko refused to hold the gun for Harris, saying that he did not have a license. Harris then left the area and returned moments later, walking onto the House floor without setting off the magnetometer.

Harris’s office has issued a statement:

Because his and his family’s lives have been threatened by someone who has been released awaiting trial, for security reasons, the Congressman never confirms whether he nor anyone else he’s with are carrying a firearm for self-defense.

As a matter of public record, he has a Maryland Handgun Permit. And the congressman always complies with the House metal detectors and wanding. The Congressman has never carried a firearm on the House floor.

This has now been confirmed by a Capitol official: Rep. Andy Harris (R-Md.) tried to bring a gun onto the House floor today.

(I also witnessed the whole thing and saw him try to give his gun to another member.)https://t.co/54ds56Of23

Today GOP Rep Andy Harris was stopped by security when he tried to bring his gun through the Capitol metal detectors and onto the House floor. GOP Reps Andy Biggs, Rick Allen and Lauren Boebert refused to be wanded down after setting off the magnetometer. https://t.co/SKU07ue5yd

@councilmanavj I will not resign. It’s hypocritical of you to say I should when you didn’t say so in 2017 to other members of Maryland’s delegation. The “tolerant” left is at it again with their cancel culture politics. pic.twitter.com/OLf1j9ZLuv