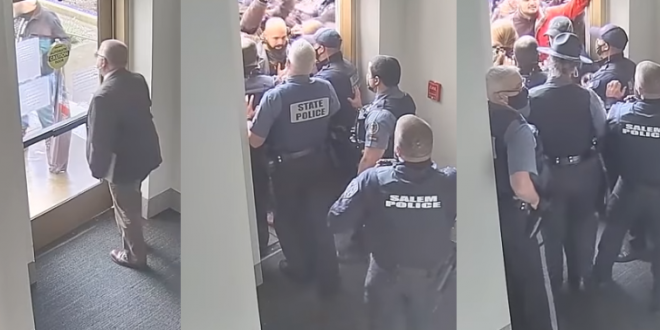 Security video obtained by The Oregonian/OregonLive under a public records request clearly shows Rep. Mike Nearman, a Republican from Independence, open two doors to the Capitol during a Dec. 21 special legislative session, allowing violent demonstrators who were protesting immediately outside the door to illegally enter the building. Oregon’s Capitol was and is closed to the public due to the pandemic.

The demonstrators, many of whom were unmasked and some of whom carried rifles, objected to the state’s coronavirus restrictions and sought to disrupt the session underway. State troopers and Salem police ultimately prevented them from entering the building’s rotunda or reaching the House or Senate chambers, but not before some of the rioters allegedly sprayed six troopers with a chemical substance that was reportedly pepper spray.