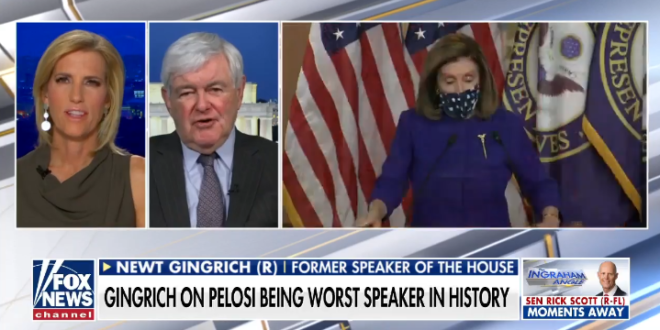 Gingrich: Nancy Pelosi Is The Worst Speaker In History

Former GOP House Speaker Newt Gingrich railed against Nancy Pelosi as the “most destructive Speaker” in history, leaving out his own checkered past, which involved paying $300,000 and resigning in disgrace after a Congressional ethics probe found he lied about violating tax law.

“First off, she keeps violating the Constitution,” he claimed, before offering up several very vague, alleged examples. “The latest impeachment is just a simple example. She uses her power ruthlessly and she has really pushed through the most radical positions ever taken by an American Speaker.”

Ingraham also left out any mention of Denny Hastert, Gingrich’s GOP successor in the job. The longest-serving Speaker in history, Hastert, who resigned in 2007, was released from federal prison three-and-a-half years ago.