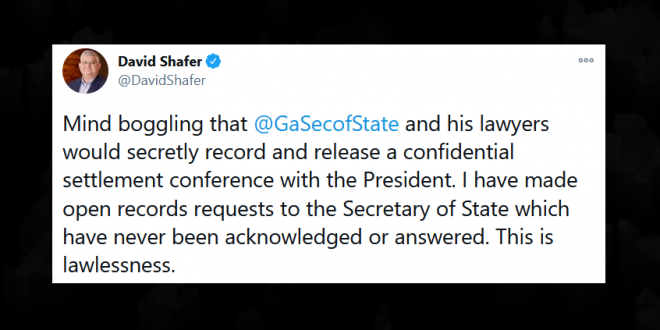 The audio recording was reported by the Post several hours after Trump said on Twitter that he had spoken to Raffensperger on the phone in an attempt to convince him to look into unfounded conspiracy theories about the vote in November. According to Trump, Raffensperger refused to do so.

In response, Raffensperger cryptically delivered a strong message to the President on Sunday. “Respectfully, President Trump: What you’re saying is not true. The truth will come out,” the tweet read. Raffensperger, a Republican and a Trump supporter, has consistently turned back Trump’s claims of voter fraud in Georgia.

David Shafer is chairman of the Georgia GOP.

Mind boggling that @GaSecofState and his lawyers would secretly record and release a confidential settlement conference with the President. I have made open records requests to the Secretary of State which have never been acknowledged or answered. This is lawlessness.

President @realDonaldTrump has filed two lawsuits – federal and state – against @GaSecofState. The telephone conference call @GaSecofState secretly recorded was a “confidential settlement discussion” of that litigation, which is still pending.

The audio published by @TheWashingtonPost is heavily edited and omits the stipulation that all discussions were for the purpose of settling litigation and confidential under federal and state law.