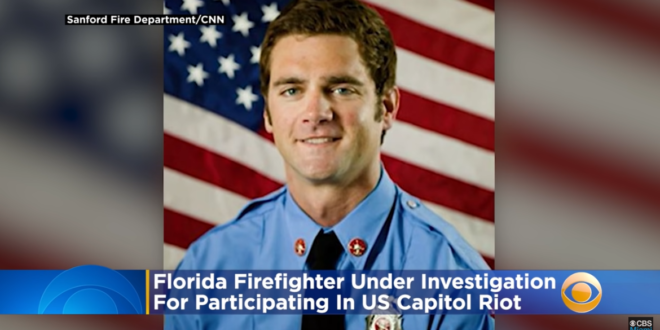 Things are getting even more dicey for a Florida firefighter linked to the D.C. insurrection. Andrew James Williams was arrested for a count each of unlawful entry of a restricted building, and disorderly conduct on Capitol grounds, the Sanford Fire Department said in a statement late Tuesday.

The defendant had already been put on administrative leave with pay last Thursday after the department learned about a photograph that put him at the scene. The image shows the man identified as Williams pointing at a placard for Nancy Pelosi, the House Speaker and perennial target for President Donald Trump.

This is moment @CitySanfordFL firefighter Andrew Williams left federal court after being arrested for his participation in #CapitolRiot. His attorney says @POTUS encouraged “despicable” behavior and that Williams “took part in none of it.” @MyNews13
🎥: Nick Allen pic.twitter.com/giYUgsKqeQ

Williams is charged with entering a temporary residence of the president and disorderly conduct on capitol grounds. Conditions of his release include:
– $25,000 bond
– surrender passport
– remove all guns from home@MyNews13 #CapitolRiot pic.twitter.com/D0Gw9CBOvM