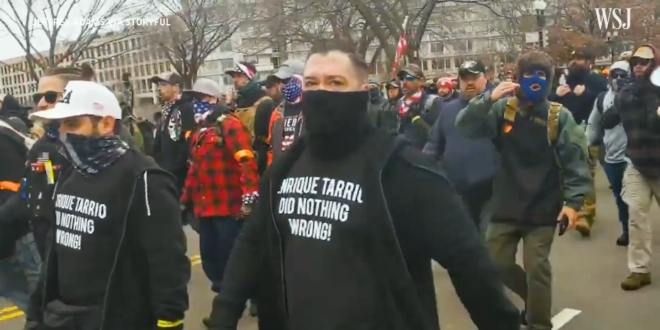 The leadership of the Proud Boys has come under increased scrutiny as agents and prosecutors across the country try to determine how closely members of the far-right nationalist group communicated during the riot at the Capitol this month and to what extent they might have planned the assault in advance, according to federal law enforcement officials.

At least six members of the organization have been charged in connection with the riot, including one of its top-ranking leaders, Joseph Biggs. Mr. Biggs, a U.S. Army veteran, led about 100 men on an angry march from the site of President Donald J. Trump’s speech toward — and then into — the Capitol building.

The Proud Boys, who have a history of scuffling with left-wing antifascist activists, have long been some of Mr. Trump’s most vocal, and violent, supporters, and he has returned the favor, telling them during one of the presidential debates to “stand back and stand by.”

Read the full article. Video below by WSJ. Watch it.

Mr. Biggs, a U.S. Army veteran, led a crew of about 100 men on an angry march from the site of President Donald J. Trump’s speech toward — then into — the Capitol building. https://t.co/qLjDVxdBD4 @alanfeuer