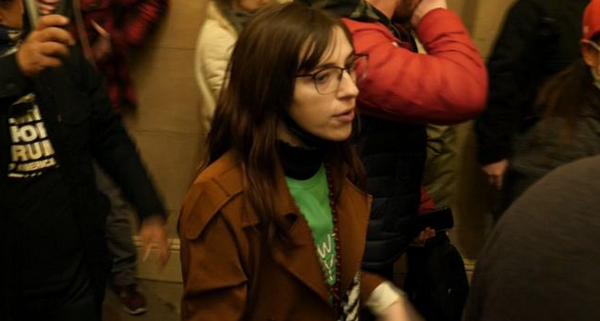 The FBI is investigating evidence that a woman who entered the Capitol on Jan. 6 stole a laptop or hard drive from Speaker Nancy Pelosi’s office and intended to sell it to Russians.

The bizarre claim, which the FBI emphasized remains under investigation, was included in an affidavit describing the criminal case against Riley June Williams, a Pennsylvania woman who was seen in footage of the Jan. 6 insurrection in area of the Capitol near Pelosi’s office.

“It appears that WILLIAMS has fled,” according to the affidavit, which was signed Sunday and posted publicly after 9 p.m.

The reporter identifies “Riley Williams” as “the person depicted in snippets of the prior ITV video described above,” the complaint says. “The reporter then interviewed a woman who identified herself as Williams’ mother and showed her some type of video footage.”

Williams’ mother “then stated that she recognized her daughter inside the U.S. Capitol Building and that her daughter had taken a sudden interest in President Trump’s politics” and “far right message boards.”

She claimed that Williams “took off,” and “is gone” and is “waiting for law enforcement to come to Williams and ask her about her activities in the Capitol.” She was wearing a shirt identifying with the Groyper Army, described by ADL as “a loose network of alt right figures who are vocal supporters of white supremacist and ‘America First’ podcaster Nick Fuentes.”

Breaking Politico: The FBI is investigating evidence that a woman who entered the Capitol on Jan. 6 stole a laptop or hard drive from Speaker Nancy Pelosi’s office and intended to sell it to Russians. https://t.co/4OcIYFTV2E

Arrested. 22-year-old Riley June Williams now in jail after her ex-boyfriend spotted her in news video from inside the US Capitol, and called the FBI tip line. She’s now being investigated for stealing Nancy Pelosi’s laptop and attempting to sell it to a friend in Russia. pic.twitter.com/6R0d6BufNZ

IDENTIFIED: Riley Williams, 22, from Pennsylvania stormed the buildings during the Washington DC siege. She attracted attention after she was filmed directing rioters “up the stairs, up the stairs”. https://t.co/dBsFoLKzsY pic.twitter.com/Aq4giwI9vH