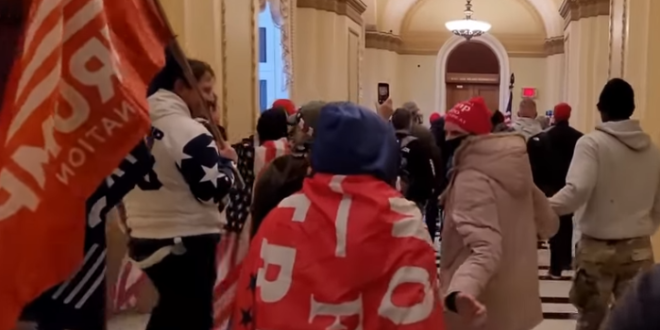 FBI: Rioter Threatened To Kill His Kids For Snitching

A man associated with a self-styled militia group that helped break into the Capitol on Jan. 6 threatened to kill his children if they cooperated with police, according to federal authorities.

In an affidavit submitted in D.C. federal court, an FBI agent wrote that Guy Reffitt was identified through video taken at the Capitol and cellphone tracking data. In the video, he appears to be cleaning chemical irritants out of his eyes.

During a search of his home on Saturday, Reffitt’s adult son told an FBI agent that his father came home two days after the insurrection, carrying an AR-15 rifle and a Smith & Wesson pistol, and revealed that he had gone armed to D.C. and “stormed the Capitol.”

Feds have previously unsealed criminal charges against dozens of people accused of storming the Capitol on January 6. Newly named among them is Guy Reffitt, who threatened to shoot his children if they became “traitors” who turned him in. https://t.co/wkTjUFgK50

What A Guy: Prosecutors say Guy Reffitt of Texas stormed the Capitol & then threatened his children: “If you turn me in, you’re a traitor & you know what happens to traitors. Traitors get shot.” He said he’d “do what he has to do” & … “put a bullet through” his daughters phone. pic.twitter.com/9VsHt3RjoL

Guy Reffitt, a purported member of Texas Freedom Fighters, has been arrested on unlawful entry, obstruction charges stemming from the insurrection at the Capitol. He allegedly told his family he “stormed the Capitol” and threatened their lives if they snitched

NEW: Guy Reffitt of Wylie has been arrested for going inside the US Capitol on Jan 6.
FBI says he’s part of “Texas Freedom Force” a “militia extremist group”.
Told his family he went to DC “to protect the country” and threatened to shoot his kids if they turned him in
(@wfaa) pic.twitter.com/1Un6ZBvIgy