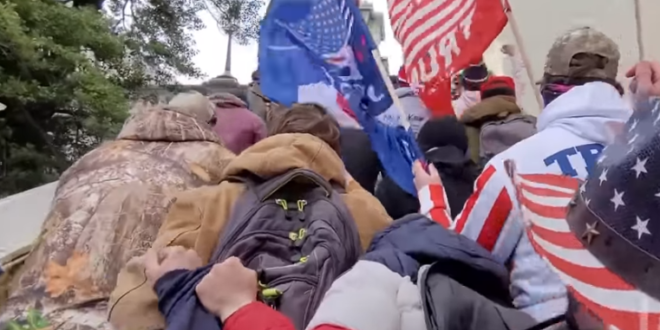 I reported on this QAnon nutbag yesterday and many of you demanded to know why she hadn’t been arrested.

The FBI on Thursday arrested a former occupational therapist for Cleveland schools and charged her in connection with the deadly Jan. 6 riot at the Capitol after they identified her as the woman in a viral photo standing next to the vice president’s chair in the Senate.

According to a criminal complaint filed Thursday in the U.S. District Court for the District of Columbia, 49-year-old Christine Priola has been charged with unlawfully entering and remaining on restricted grounds, violent entry and disorderly conduct on Capitol grounds and unlawful parading while at the Capitol.

The filing says the Cleveland Division of the FBI received an anonymous tip on Friday that Priola was the woman pictured in the photograph, taken by a Getty Images photographer, holding a sign that read, “The Children Cry Out for Justice,” while standing next to the chair reserved for Vice President Pence in the Senate chamber.

Christine Priola, a CMSD teacher (resigned yesterday)…but if this is your kids teacher, how do you explain to you kid any of this? Don’t tell me that THIS isn’t America. Just say that you didn’t believe what black/brown folk been telling you all along. #ThisIsAmerica pic.twitter.com/BtZsHPMsuq