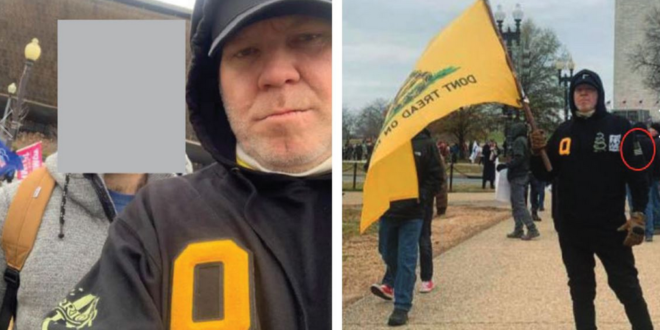 A Bridgeville man who livestreamed himself in the Crypt underneath the U.S. Capitol rotunda during the Jan. 6 attack there was arrested Tuesday morning. Kenneth Grayson, 51, is charged with five federal counts, including knowingly entering a restricted building; disorderly conduct that impedes government business; disruptive conduct in the Capitol buildings; parading, demonstrating or picketing in the Capitol buildings; and obstructing or impeding an official proceeding.

The FBI was further able to identify Grayson through a photo he sent to his family at 10:37 a.m. Jan. 6 standing in front of the Washington Monument, according to the complaint. In that photo, Grayson is shown to be wearing a black Pittsburgh Pirates cap and a black hooded sweatshirt with a yellow letter Q on the right lapel, which agents said refers to QAnon. He was also carrying a Gadsden flag.

Kenneth Grayson of Bridgeville was arrested today by @FBIPittsburgh on charges relating to the Jan. 6 riot at the U.S. Capitol. He will make an Initial Appearance today at 3 p.m. in U.S. District Court. The government intends to seek his detention. pic.twitter.com/ySXSoiBSjP

Here’s a U.S. Capitol surveillance camera angle I haven’t seen before. The feds say it shows Kenneth Grayson in the crypt. pic.twitter.com/ZxjZGphMa0

UPDATE: Kenneth Grayson, who wore a ‘Q’ hoodie to the Capitol riot and wrote online that he was there “to fight not hang out,” has been arrested.