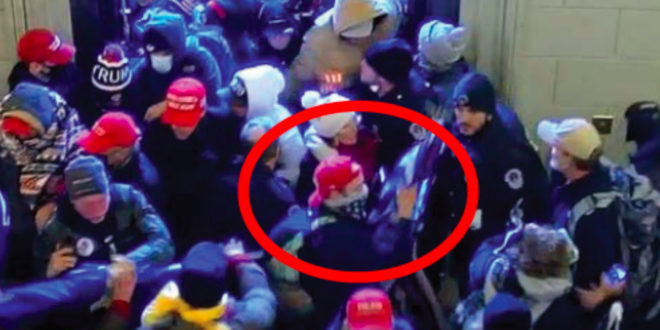 A man from Dallas, Texas is facing multiple charges after storming the Capitol and tweeting “Assassinate AOC” that same day, according to documents from the Department of Justice. Garret Miller faces five criminal charges, including alleged unlawful entry and “threat to injure” others.

The FBI agent who gave a statement of facts for the case said Miller posted on social media about the insurrection both before and on Jan. 6, and shared photos of himself inside the building alongside other rioters.

On Jan. 6, he tweeted a video of himself in the Capitol, which he captioned “From inside congress.” He also shared a selfie from inside the Capitol on Facebook, where he wrote, “just wanted to incriminate myself a little lol.”

“Mr. Miller takes responsibility for his actions taken on January 6 on behalf of his support for former President Trump and wants to move forward and put this behind him. He has the support of his family and his comments reflect misguided political hyperbole that will not be repeated,” his attorney, Clint Broden said in a statement.

FBI says he posted a selfie on FB, commented “just wanted to incriminate myself a little lol”

When someone tweeted those inside were infiltrators, Miller replied “Nah we stormed it” and “Assassinate @AOC”
(@wfaa) pic.twitter.com/4Wlvlafi6Q

Garrett Miller stormed the Capitol with a grappling hook, rope and a level 3 vest, and posted “assassinate AOC” on social media, said he just “wanted to incriminate” himself.

The FBI founds photos and videos from inside the U.S. Capitol Rotunda posted on Garret Miller’s Facebook, Twitter and Instagram accounts. In his posts he also directed violence and threats toward the officer who fatally shot a woman inside the Capitol.
https://t.co/TcB5Yc57CS

NEW: Surveillance footage shows the moments before the @FBI arrested Garret Miller at his residence, Wednesday morning. Miller is accused of breaching the Capitol Building during the Jan. 6 attack. @FOX4 https://t.co/t0npiADHoM pic.twitter.com/JMyhh03nmT

ARRESTED: Garret A. Miller, 34, from Richardson Texas made death threats in his posts, calling for the murder of a U.S. Capitol Police officer and the assassination of @AOC. https://t.co/56nyb0XZDZ https://t.co/vg0fIAiHjZ pic.twitter.com/ntie4gFvLD

“Just wanted to incriminate myself a little”