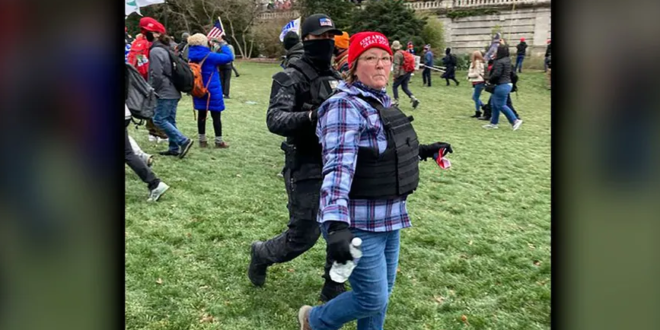 A woman reportedly connected to the U.S. Capitol riots is arrested in Nashville. The FBI took 56-year-old Lisa Eisenhart, of Woodstock, Georgia, into custody Saturday. Video and photos purportedly shows that she attended the event with her son, Eric Munchel, who was arrested last weekend in Nashville.

Eisenhart is facing charges of conspiracy civil disorders; restricted buildings or grounds; violent entry or disorderly conduct. She will go before a judge on Tuesday. Video footage captured the mom-and-son duo holding the flex cuffs as they tried to chase down two cops inside the Capitol, a criminal complaint says.

ARRESTED: Lisa Eisenhart, 57, from Tennessee who attended the Capitol riot with her son, Eric Munchel, better known as “zip-tie guy.” She said, “I’d rather die as a 57-year-old woman than live under oppression. I’d rather die and would rather fight.”https://t.co/LAOvql5f4c pic.twitter.com/y258ScT129

Capitol Riot Arrest-Lisa Eisenhart was taken into custody by FBI Agents in Nashville a short time ago on charges relating to the U.S. Capitol riots. Charges include conspiring with her son, Eric Munchel to violate federal statutes. pic.twitter.com/lgjqrYN8j2

Previous FBI Collars Woman Who Brandished Pelosi’s Office Sign
Next Ben Sasse: QAnon Will Destroy The GOP From Within