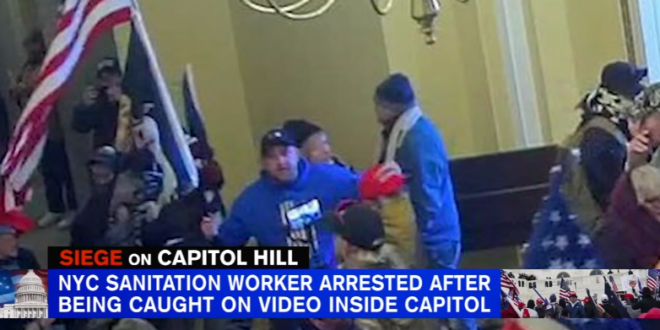 Federal authorities charged a city Department of Sanitation worker in the Capitol riot — after The Post identified him and revealed clear photos of him at the scene of the Jan. 6 siege, according to court documents.

In an affidavit by an FBI agent supporting the complaint, the investigator repeatedly mentions a Jan. 14 Post story that helped authorities identify the Q-Anon-backing garbage man.

Dominick Madden, 43, called in sick to his job at the NYC Dept. of Sanitation on Jan. 6, the FBI says. But agents tracked him to the Capitol riot wearing a Qanon sweatshirt through his social posts & license plate reader data showing him making the trip. pic.twitter.com/v5U8W3PjLA

Dominick Madden a QAnon-believing city sanitation worker from Brooklyn has been arrested by the FBI pic.twitter.com/RMenCPCiwf