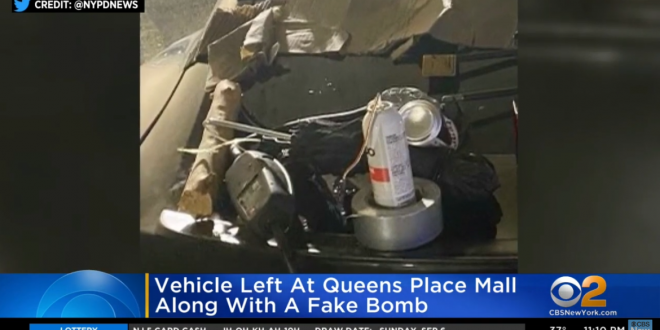 A man suspected of placing a hoax bomb that evacuated a mall in Queens, New York, on Monday morning is a right-wing conspiracy theorist who was arrested and accused of arson last week and has been under investigation by police for at least a week. Law enforcement officials said they are looking for the man, Louis Shenker, 22, after New York City firefighters discovered a stolen car with wire, cans and electrical wiring in the form of a hoax bomb device on top of the car’s trunk.

No explosives were found in the vehicle — a Tesla with Nevada plates parked on a spiral ramp between parking garage levels at the Queens Place mall — but police rescued a husky dog from inside it. The car had pro-Black Lives Matter movement signage, raising questions of whether the signs were intended to discredit the movement, three senior law enforcement officials said.

Shenker has repeatedly tweeted at Nick Fuentes, a prominent figure in the far-right Groyper movement, which seeks to turn the racist and homophobic trolling culture of the extremist forum 4chan into real life action. His Twitter account has been suspended.

Shenker appeared on an InfoWars online conspiracy webcast last month, when he pushed false conspiracy theories about the election, the coronavirus and a plot to take over the world.

Mr. Shenker also had his own podcast known as “The Minuteman,” on which he aired his far-right views, the official said. Among other things, he had threatened to conduct a citizen’s arrest of Mr. de Blasio and had said he intended to travel to Georgia to try and disrupt the runoff election.

He’s peddled conspiracy theories about the election and COVID-19 online and in InfoWars webcast appearances. “The communist party has been planning the destruction of the United States of America for over 100 years. The year 2020 is when they make their final move,” he wrote on Facebook.

On social media, he touted his support for President Donald Trump. His top post on Facebook is a share of Trump’s Christmas message. His cover photo reads, “We the People.” He wrote of Trump, “I will not allow the cowards in the senate to continue to stab our Caesar.” He also repeatedly shared Trump’s posts about voter fraud.

BREAKING: A man with extremist right-wing views is being sought in a big bomb scare at a Queens mall. A Tesla was loaded with what looked like an explosive device.
The man, Louis Shenker, has a podcast, “The Minuteman,” in which he voices far-right views.https://t.co/6zI1nGe2CS

Louis Shenker, 22, accused of placing a hoax bomb that evacuated a mall in Queens, New York, on Monday morning is a right-wing conspiracy theorist who was arrested for arson on Dec. 30 and has been under investigation by the NYPD for at least a week. pic.twitter.com/cfP9sRBfwS