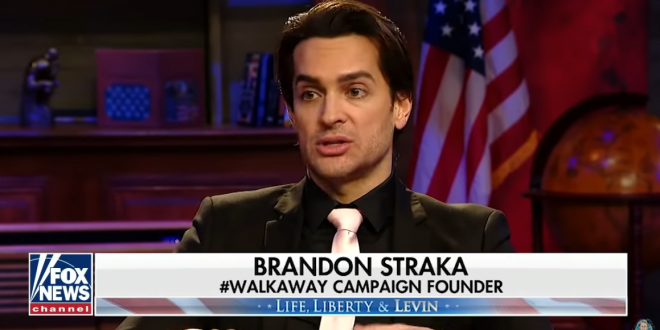 Homocon Trump cultist Brandon Straka appeared here yesterday when he boasted that it was “patriots” who rioted at the US Capitol and definitely not antifa. Today Straka is screaming because Facebook has apparently banned his “WalkAway” group.

According to a notice allegedly sent Straka by Facebook, the group violated their policies on “hateful, threatening, or obscene” content.

Straka, who has appeared onstage at multiple Trump rallies and has been lionized on-air by Fox News hosts, has a history of making false claims about Facebook bannings, so we’ll see if this is real. A search for the group shows “not available” at this writing.

🚨🚨🚨FACEBOOK has removed the #WalkAway Campaign and has BANNED ME and EVERY MEMBER of my team!!!
Over half a million people in #WalkAway with hundreds of thousands of testimonial videos and stories is GONE. Facebook has banned everything related to #WalkAway. pic.twitter.com/WxoKu1HpSb

For the last 36 hours right wing pundits, influencers, and media talking heads have been acting like slaves begging their left wing masters not to beat them. It’s pathetic and disgraceful.

The entire nation rallied behind @KLoeffler. We all stood behind her & cheered her on. I came to GA for 3 weeks, & dozens of volunteers & I knocked on thousands of doors for her (you’re welcome BTW, Kelly!) We all fought for this woman. And she backstabbed every single one of us.

Hey stupid- I was there. I have on video people getting tear gassed, and they were firing REAL bullets. They shot an unarmed woman in the face & killed her. You didn’t hear about it because she’s white & the media doesn’t care when white ppl get killed. And neither do you.

RELATED: Straka recently appeared on JMG when he staged a ridiculous face mask incident on an American Airlines flight, resulting in his being put indefinitely on the carrier’s no-fly list. That same week he was also in the news when a federal court booted his $20 million lawsuit against the NYC LGBT Community center for canceling his “Walk Away” event. In August, he earned a retweet from his Glorious Leader by calling for people to “Leave Democrat cities. Let them rot.”