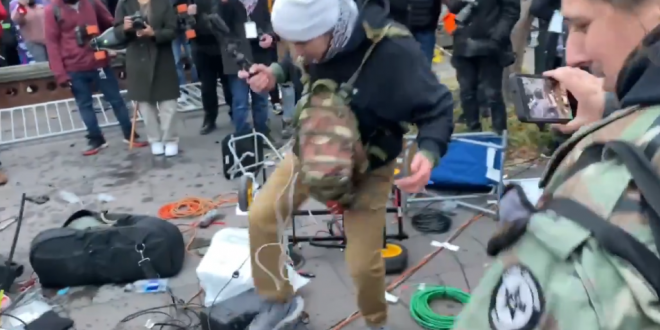 After knocking down barricades around a media enclosure and forcing reporters to flee, a group of Trump cultists merrily filmed themselves destroying what is surely many thousands of dollars worth of video equipment. The group stomped, smashed, and poured water on the equipment as amid shouts of “traitors!” and “take a fucking souvenir!” One man picked up an abandoned microphone and screamed, “Donald Trump won!” as other tried to force open boxes of equipment.

BREAKING. Mob of Trump supporters swarm the media near the US Capitol. They yell what Trump frequently says, “the media is the enemy of the people.” They destroy equipment and chased out reporters. I’ve never seen anything like this in my 20 year career: @nbcwashington @MSNBC pic.twitter.com/3VLC07JQR2