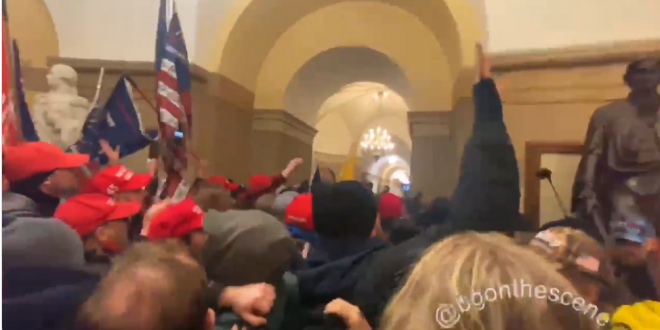 The rapid expansion of military involvement came after Mayor Muriel E. Bowser (D) requested that guardsmen already on duty be sent to the Capitol, said the defense official and a District official, speaking on the condition of anonymity due the sensitivity of the issue.

Defense officials, who have been resistant to getting dragged into politics, initially offered instead to replace police in other capacity, allowing more law enforcement to respond at the Capitol, the defense official said.

“Call it off, Mr. President. We need you to call this off,” Rep. Mike Gallagher (R-Pa.) said in a CNN interview, saying Trump should tweet to his supporters: “It’s over. Please go home. Thank you for your support. I look forward to a peaceful transition of power.”

Gallagher’s comments follow those of Rep. Adam Kinzinger (R-Ill.), who likened the protesters storming the Capitol to “a coup attempt.” Both Gallagher and Kinzinger have spoken out in previous days against House Republicans’ effort to call the electoral college votes into question, a process that was underway when protesters stormed the Capitol.

I am asking for everyone at the U.S. Capitol to remain peaceful. No violence! Remember, WE are the Party of Law & Order – respect the Law and our great men and women in Blue. Thank you!

Please support our Capitol Police and Law Enforcement. They are truly on the side of our Country. Stay peaceful!

It took 159 years, but a mob marching behind a confederate flag has stormed the US Capitol. They are doing so on @realDonaldTrump’s express orders. pic.twitter.com/Q9MnbT0emZ

We are witnessing absolute banana republic crap in the United States Capitol right now. @realdonaldtrump, you need to call this off. pic.twitter.com/0QGx2PlXFY