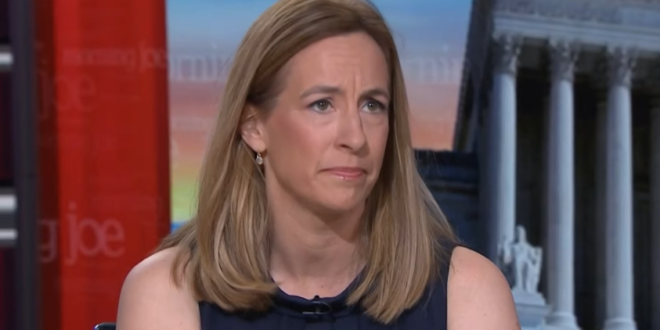 Rep. Mikie Sherrill (D-N.J.) said Tuesday that she witnessed colleagues escorting people through the Capitol on Jan. 5 for what she described as “reconnaissance” ahead of the next day’s violent insurrection that left five dead.

In a 13-minute Facebook video billed as an address to her constituents about the House’s efforts to hold President Donald Trump accountable for inciting the riot, Sherrill included the allegation as part of a call to hold Trump’s allies in Congress accountable as well.

Sherrill did not identify the lawmakers she was referring to, how she was able to describe their activities as “reconnaissance” and how she knew they were connected to the riots that consumed the Capitol the following day. Sherrill’s office was not immediately available for comment.

This is quite an allegation from Rep. Mikie Sherrill. pic.twitter.com/0IBBwasLdt

BREAKING: Rep. Mikie Sherrill said tonight that *members of Congress* led people through the Capitol on a “reconnaissance” mission one day before the riot. “I’m going to see they are held accountable, and if necessary, ensure they don’t serve in Congress.” https://t.co/O2N2Mzji4t

Seeing the reporting that Congresswoman Mikie Sherrill stating that some of her colleagues gave some of the insurrectionists a “recon” tour the day before, which reminded me of reporting as it was going on that sources close to the WH were IN TOUCH WITH THE RIOTERS IN REAL TIME https://t.co/FjGkRStleX

“In a live webcast … , Rep. Mikie Sherrill, D-11, made a startling claim that some members of Congress led groups of people through the Capitol Building on a ‘reconnaissance’ mission one day before the riot that laid a deadly siege on the government’s legislative branch.” https://t.co/8Mxc7sweXV