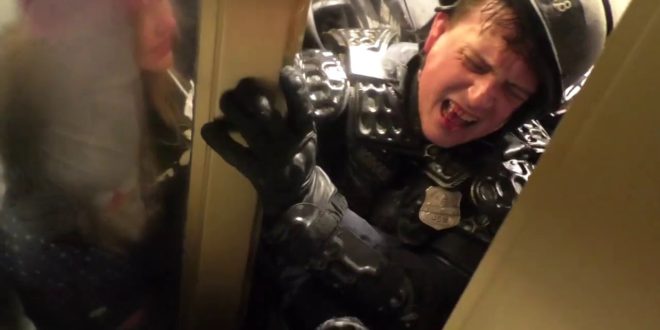 “They were calling us traitors, shouting at us, telling us to remember our oath, and eventually, they attacked us,” Officer Daniel Hodges said. Hodges, a patrol officer for six years, was crushed in a doorway.

“At that moment in the hallway where I was pinned, I was there to do my best to keep them out, obviously, and the way I was doing that was with my body,” he said. “Unfortunately, at that moment, my arms were pinned. I was unable to defend myself.”

Someone ripped off his mask. “I’m glad that video’s going around, because it shows people that we absolutely fought tooth and nail to keep the Capitol safe, to keep our congressmen safe and keep them out,” he said.

Daniel Hodges, the DC police officer who was crushed in a doorway at the Capitol speaks out saying a man ripped away his baton, and was “practically foaming at the mouth… true believers in the worst way.” https://t.co/WWGvhbSnt5 pic.twitter.com/jUTkvTDsxT