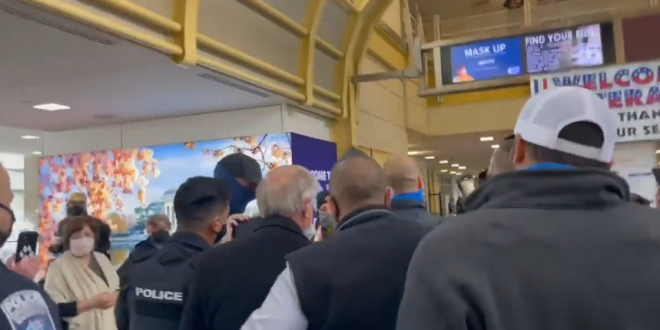 A throng of supporters of President Donald Trump accosted Republican Sen. Lindsey Graham at Reagan National Airport on Friday. The Politico reporter Daniel Lippman and the conservative activist Mindy Robinson, who was in the crowd, posted videos of the interaction on Twitter.

In the video Lippman posted — which he said was shared by a source — a crowd of people could be seen gathering around a bench where Graham appeared to be talking on a cellphone.

Read the full article. Watch the clip and you’ll hear the shouted threats. It appears that a popular MAGA personality named Mindy Robinson was involved. Also note the woman in the QAnon shirt.

Lindsey Graham just made the mistake walking by me and a mass of angry patriots at the airport in DC.

All America wants is for you to AUDIT OUR VOTE and purge this election of this massive corruption…and you won’t do it. We’re not letting this “slide” so expect more of this. pic.twitter.com/pbemr2Gcr9

A source sends this video of a group of Trump supporters today harassing Sen. Lindsey Graham at Reagan airport and loudly calling him a “traitor” after he publicly broke with Trump earlier this week. pic.twitter.com/XBF8K6DIUD