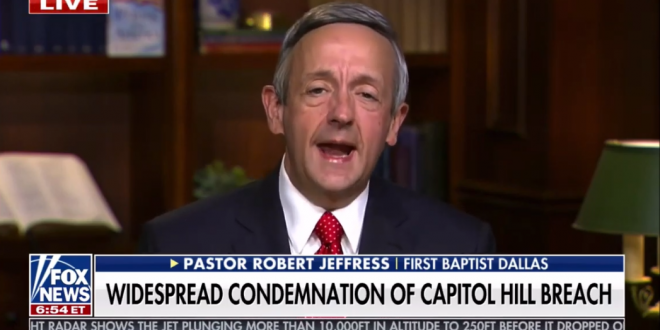 Cultist Pastor: Rioters Were Part Of “Kingdom Of Satan”

“We’ve got to acknowledge that what happened Wednesday at the Capitol was not only a crime, it was a sin against God. The people who stormed that Capitol, the people who killed that police officer, were not a part of the kingdom of God, as some people claimed; they were a part of the kingdom of Satan.” – Cultist megachurch Pastor Robert Jeffress, who goes on to scream about not going after people who supported the attempted coup because that would be “cancel culture.”

Jeffress has said that Biden voters have sold their soul to Satan, that all Jews and Mormons go to hell, that Obama was the precursor to the antichrist, that LGBTs need rescuing from Satan’s deception, that God designed the borders of the United States, that there will be civil war if Trump is removed from office, and that God gave Trump the moral authority to have foreign leaders assassinated. In April, Glorious Leader promoted his online Easter service. In July, it was revealed that Jeffress’ megachurch got up to $5 million in bailout funds.