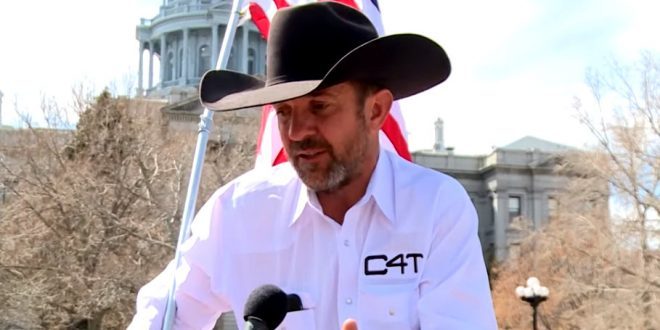 A New Mexico county official and founder of the group Cowboys for Trump who had vowed to return to Washington after last week’s riot at the U.S. Capitol to place a flag on House Speaker Nancy Pelosi’s desk has been arrested Sunday by the FBI.

According to court documents, Griffin told investigators that he was “caught up” in the crowd, which pushed its way through the barricades and entered the restricted area of the U.S. Capitol, but he said he did not enter the building and instead remained on the U.S. Capitol steps.

In an affidavit, a Metropolitan Police detective said a Cowboys for Trump videographer told authorities that after he and Griffin saw the group push past security barriers, they scaled the Capitol building’s wall before making their way to an outside deck.

There, Griffin used a bullhorn to lead the group in prayer, the document states. In a Facebook post on the Cowboys for Trump page, Griffin later said he planned to return to the U.S. Capitol on Jan. 20 for a possible “2nd Amendment rally” that would include “blood running out of that building,” the affidavit says.

At a Jan. 14 Otero County meeting, Griffin told other officials that he planned on taking a rifle and a revolver when he returned to Washington, according to the affidavit.

Griffin last appeared on JMG when Trump retweeted a video in which Griffin declared, “The only good Democrat is a dead Democrat.”

New Mexico county commissioner Cuoy Griffin was arrested in DC today b/c of his role in the Capitol riot. Griffin, who co founded ‘Cowboys for Trump’, went back to D.C., reportedly armed, & claims he was armed on the 6th. New Mexico’s AG is vowing to have an ousted from office. pic.twitter.com/HBoV3JPmM4

#Breaking: A source tells @ABC News that “Cowboys for Trump” leader and Otero County Commissioner Couy Griffin was arrested by the FBI in D.C. on Sunday afternoon. #nmpol https://t.co/RBgNalWh5l pic.twitter.com/cHQxFeHoMn

Last year, he “urged people who support performances of the Black National Anthem at football games to “go back to Africa” and condemned as “vile scum” people who portray the Confederate flag as racist, in a live Facebook video that has since been removed.”https://t.co/pfrQv82ltI

On the afternoon of January 17, 2021, the U.S. Capitol Police notified the FBI that they had detained Couy Griffin, 47, of Tularosa, N.M. Griffin was the subject of an arrest warrant issued by the Albuquerque FBI Division for his alleged role in the January 6 Capitol riots. 1/

The FBI Washington Field Office has taken Griffin into custody. Additional information will be available at the Department of Justice’s website: https://t.co/r4de9fQD6S
2/2

Still curious about this cowboy-hatted individual, who led the masses in prayer during the attack on the Capitol.

If any of y'all know who he is, my DMs are open.

(Video from the Parler archive) pic.twitter.com/yjBf47b0V6