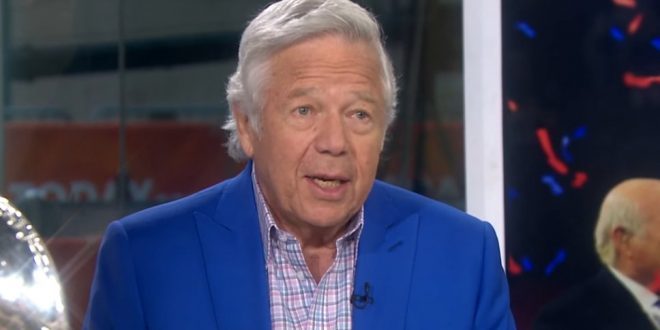 Sex videos of New England Patriots owner Robert Kraft are set to be destroyed under a court order. It’s been two years since the 79-year-old billionaire was among more than two dozen people secretly videotaped by police during a massage parlor prostitution sting in Palm Beach County.

U.S. District Judge Rodolfo A. Ruiz II on Friday ruled that the videos of Kraft and the others must be wiped from existence, because the Jupiter police surveillance was deemed unlawful. Kraft had feared the tapes of him in the nude would be publicized on the internet.

The appellate court found the cops messed up by recording two women and two men who got legitimate massages, rather than training their lenses only on the men paying for sexual services.

Read the full article. Kraft is tight with Trump.

A federal judge in Florida has ordered the destruction of video that allegedly shows New England Patriots owner Robert Kraft paying for massage parlor sex. Earlier, the police surveillance of Kraft and other customers was deemed unlawful. https://t.co/F4D85HR2Gq

Previous Nikki Haley: Trump’s Actions Since Election Day “Were Not His Finest, But Give The Man A Break, Move On”
Next Biden To Reopen Federal Obamacare Marketplaces