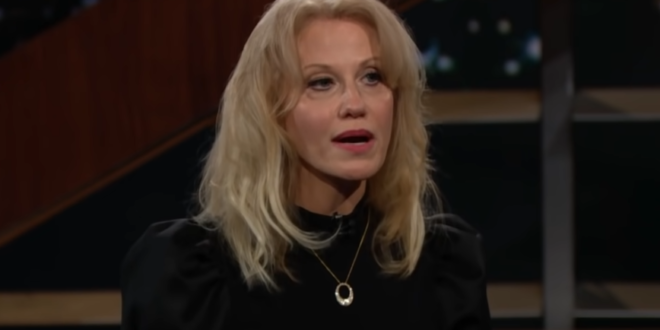 Conway: You Can’t Deny People Are Better Off [VIDEO]

Kellyanne Conway denounced the storming of the Capitol and said she had insisted to President Trump for months that he’d lost the election, but otherwise found little common ground with Bill Maher over the legacy of the last four years.

“How do you look back now … anything go wrong?” the host of HBO’s Real Time With Bill Maher asked Trump’s former and indefatigable senior counselor.

“Remember, a lot went right… People are better off and you can’t deny that,” Conway said of the man who wouldn’t wear a mask.” Well, Maher said, “A lot of them are dead.”

Kellyanne confessed that she’d tried to send a message to Trump on Jan. 6, as his followers (again, at his incitement) were storming the U.S. Capitol while he did absolutely nothing. “I wish the president had spoken with the people earlier to get them the hell out of there,” offered Conway.

Then Maher countered: “You must admit that the reason why they were there is cause he never conceded the election.” “Well, I did a long time ago,” replied Conway, rather hollowly.