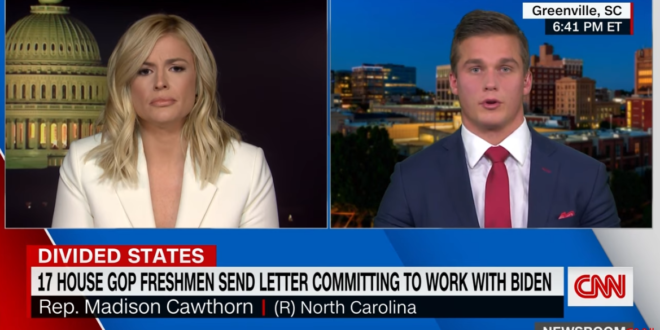 Two weeks after riling up a crowd of Trump supporters with claims of election fraud ahead of the Jan. 6 Capitol riot, GOP Rep. Madison Cawthorn tried to rehabilitate his stance on the presidential election on Saturday night—only to have his entire argument fall apart in spectacular fashion.

Pressed by CNN’s Pamela Brown to explain what evidence had motivated him to contest the election results in the first place, Cawthorn visibly struggled to string together a coherent argument.

Brown pressed the lawmaker on his reasons for contesting the presidential electoral votes in Congress. Cawthorn claimed that an official was “ballot harvesting” in the “parks” of Wisconsin.

Brown pointed out that no court had supported any of the baseless arguments about election fraud — including courts with judges appointed by Donald Trump.

Pressed again to provide at least one specific example of election fraud, he responded, bizarrely: “Like I said, that’s not the reason I contested the election.”

Republican Rep. Madison Cawthorn of North Carolina said Saturday that he accepts Joe Biden as president and that the 2020 election was not conducted fraudulently.

Cawthorn was one of more than 120 House GOP members who voted to sustain the objection to electoral votes from Arizona and Pennsylvania earlier this month when Congress met to to certify President-elect Biden’s victory.

“Yes, I think I would say that the election was not fraudulent. You know, the Constitution allowed for us to be able to push back as much as we could and I did that to the amount of the constitutional limits that I had at my disposal. So now I would say that Joseph R. Biden is our president,” he added.

madison cawthorn claims to be pro life and yet here is getting aborted on live television, curious. https://t.co/PBuFMgxOHo

.@CawthornforNC isn’t just playing dumb, he is. He said there were nearly 400 House members in the 116th Congress and there could be over 500 in the 118th after the census. @RepCawthorn said he supports DACA because if you’re born here you should get to stay here. https://t.co/v0yOOa1WV3