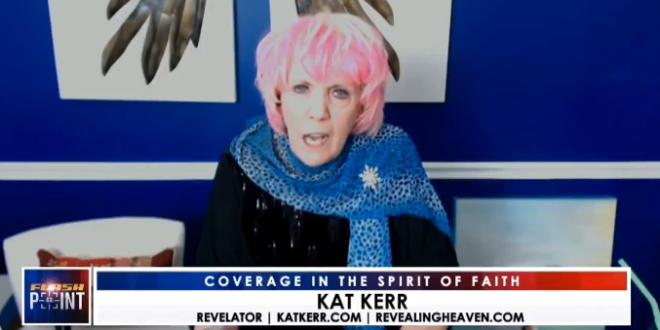 “For I say this is my land and these are my people. And I have raised him up for such a time as this. My people have prayed, they have fasted, they have called on my name and I will not turn a deaf ear unto them.

“But to the left, to the wicked, to those to chose to cheat and steal and lie, they shall have every curse come upon them, that they have spoke over my president, Donald J. Trump. I say that he IS the president. He won! And in 2021, you will see that he won.

“He is illegitimate and I will not confirm him. I will not talk about him. He will not be known in this land and one day his name will be like dust. And I say he will be crushed. The evil and wickedness will be seen.

“Do not side with evil or that is what you will have. Do not side with wickedness or that will consume you. You do not want to be a part of what is going on there and I say I will END IT when I say it is over.” – Kat Kerr, quoting what God personally told her.

“Prophetess” Kat Kerr speaks on behalf of God by screaming that Trump is still president while Biden is illegitimate, evil, “and one day his name will be like dust.” pic.twitter.com/UGmx2haFEi