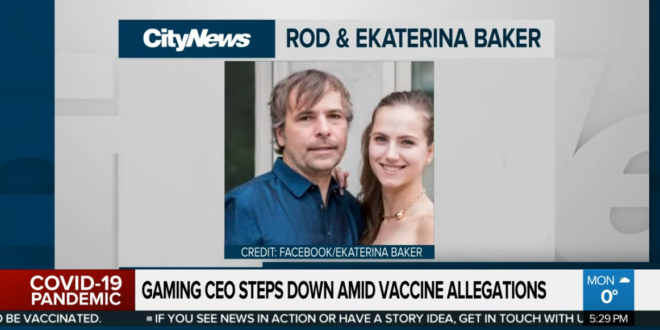 CEO And Wife Posed As Motel Workers To Get Vaccine

The CEO of a casino company valued at nearly $2bn (£1.6bn) has quit after he and his wife were charged with misleading authorities to get a Covid vaccine.

Rod Baker, of the Great Canadian Gaming Corp, and his wife Ekaterina had traveled to the remote northern Yukon territory for the jabs. The region, home to many indigenous people, has a faster vaccination rate than in the rest of Canada, data shows.

The couple had posed as motel workers. They were only found out after asking to be taken to the airport straight after the vaccination last week in the small community of Beaver Creek, on the border with the US state of Alaska.

Cullen Commission will hear direct evidence from the first Great Canadian Gaming manager to face questions under oath today. Meanwhile, the president Rod Baker has announced he is stepping down. I repeatedly asked to interview him and Senator Larry Campbell, (w. no response)

The pair each received two $575 fines for failing to self isolate and failing to behave in a manner consistent with their declaration.https://t.co/TSOOn2r9GI

I spent the better part of the weekend confirming their identities after getting copies of the CEMA tickets late on Friday. On Saturday, Ekaterina’s Instagram was completely public. When I reached out, she blocked me and later deleted the account. pic.twitter.com/9Gu7G2BM9a