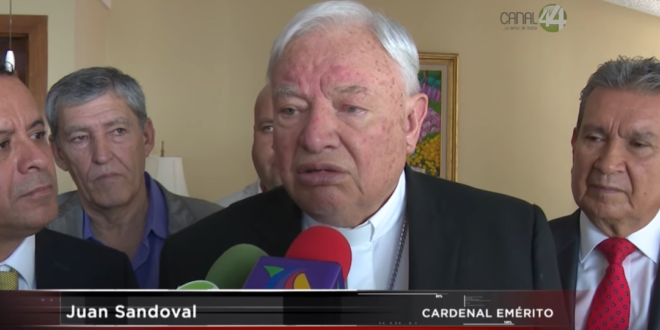 A Mexican cardinal’s Facebook video was flagged after he said COVID vaccines were being used to implant satanic microchips in people. Cardinal Juan Sandoval Iñiguez, 87, claimed vaccines come with a microchip that has “the mark of the beast.”

Sandoval was archbishop of Guadalajara for 17 years before retiring in 2011. He continued to espouse conservative viewpoints afterward, holding a “nationwide exorcism” after Mexico legalized same-sex marriage in 2015.

An information service operated by the Archdiocese of Guadalajara — posted a screenshot from the video on its Facebook page Jan. 13, along with the text, “Cardinal Juan Sandoval denounced the imposition of a new world order, hours later his video was censored.” It also posted the video on its regular website, along with a story on its removal.

The cardinal mentioned conspiratorially Microsoft founder and health philanthropist Bill Gates and alleged a U.S. laboratory had a strain of another virus ready.

He then started speaking of one world government. Sandoval, 87, has detoured into conspiracies throughout the pandemic and publicly questioned health precautions such as closing businesses and canceling services. He has also minimized the impact of the illness and dispensed erroneous medical advice.

A Mexican cardinal’s Facebook video was flagged after he said COVID vaccines were being used to implant satanic microchips in people.https://t.co/DAoDWkMv4S