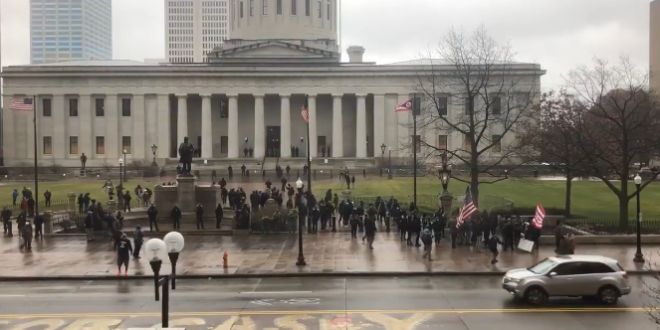 Carrying a large “Liberty or Death” flag, assault weapons and other firearms, a group of more than 50 gathered at State and Third streets just after 11 a.m outside the Ohio Statehouse. One man, calling himself a Boogaloo mascot, said of the weapons: “Best case scenario, they’re just paper weights. We don’t even pull them out of the holsters.”

One man from northern Ohio, who would only give his initials as “J.C.,” was carrying an AK-47 slung over his shoulder. He said the point of carrying a gun was to “normalize them.” “They are a tool. They are a conversation starter,” he said. “The more familiar people are with guns, the more comfortable they are.”

Here’s a look at the Ohio Statehouse right now. A lot of law enforcement.

Now – a group that appears to be Proud Boys (described as a hate group) have walked up.

I would say about 20 people now gathering just in front of the Statehouse. @wsyx6 @fox28columbus pic.twitter.com/bramXdgygB

MORE: Here’s a look at the Statehouse now. Hearing some in the crowd could be with boogaloo movement. A lot of people with cameras out here and a lot of law enforcement. pic.twitter.com/yM9Ic1GSW2

We have a huge law enforcement presence, the “dancing trucker” waving & dancing around, some people armed from my vantage point, a few Biden Harris flags waving, people talking on megaphones and more.

We haven’t seen any confrontations. pic.twitter.com/1Bnal0AZMb