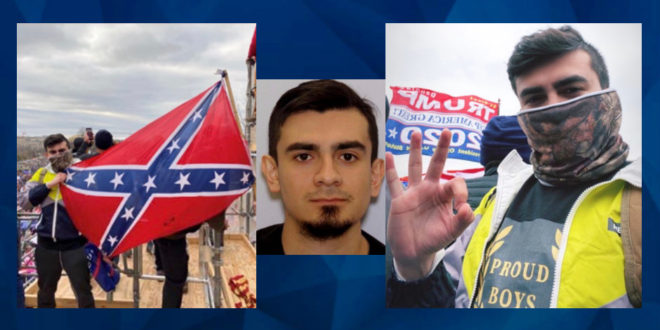 A self-proclaimed white supremacist from Maryland who was on parole for burglary has been arrested in connection with the riots at the US Capitol after his ankle monitor placed him at the scene of the unrest, officials said.

Bryan Betancur “has made statements to law enforcement officers that he is a member of several white supremacy organizations” and “has voiced homicidal ideations, made comments about conducting a school shooting and has researched mass shootings,” according to a federal affidavit.

He also has expressed his desire to be a “lone wolf killer,” it said. The Silver Spring resident, who has been convicted of burglary, was on probation when he asked for — and received — permission to travel to DC to sell Bibles with an organization called Gideon International.

Authorities say Bryan Betancur, arrested today in connection to the U.S. Capitol insurrection, told them about his membership in “several white supremacy organizations.”

Maryland Man Arrested,… After GPS Monitor Places Him At US Capitol During Riotshttps://t.co/Zg9bPCLMWR

The latest #CapitolRiot charges: The DOJ says “self-professed white supremacist” Bryan Betancur, shown below in yellow posing with a Confederate battle flag at the Capitol, was on GPS monitoring when he participated in the breach of the Capitol Building. pic.twitter.com/wwJ1UpbVbl