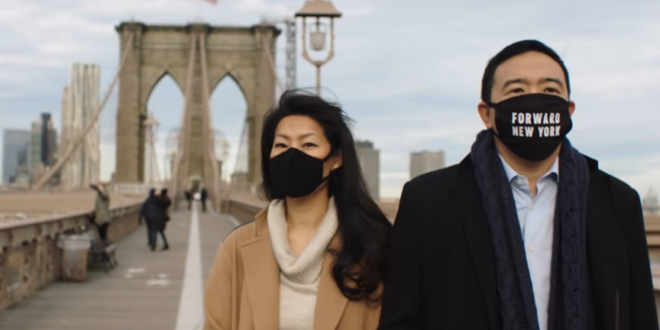 After weeks of weighing a candidacy, former presidential candidate Andrew Yang announced on Wednesday night that he is entering the race for mayor.

Yang’s campaign released a video showing him in iconic locations across the five boroughs. He plays the piano near the Coney Island boardwalk, rides the subway near Yankee Stadium, watches a skateboarder, and then takes a spin on it at Grand Army Plaza, and walks across the Brooklyn Bridge alongside his wife, Evelyn.

“I ran for president because I saw the economy was not working for everyday Americans,” Yang says in the video. “Seeing my city the way it is now, breaks my heart.”

Yang’s entrance into the race was less of a question of “if” but “when,” especially after he was spotted across the city recently filming his launch video.

What’s more surprising is how Yang plans to take what was his signature proposal on the presidential trail, universal basic income or UBI, and dramatically scale it back to create a municipal-scale plan for the poorest New Yorkers.

According to a source with the Yang campaign, his revamped UBI plan would grant 500,000 New Yorkers in the greatest need an annual $2,000 – $5,000 through a program administered by the city’s Human Resources Administration, the same city agency that administers other benefits programs.