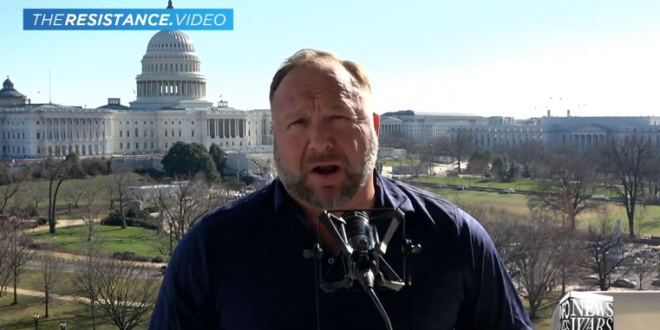 Alex Jones Claims The FBI Wants Him For Questioning

It’s the modern Reichstag 2.0, but it didn’t go off like they wanted last Wednesday, so now they want the really big event. And they have the FBI call us and say, “Yeah, we want you to come in for questioning about running the attack on the Capitol.”

Because now the official story is it was coordinated. First it was Trump’s speech that caused it. But now we know — we know who did it: Antifa with some paramilitary groups all together, which are going to turn out to be feds with idiots they provocateured to be part of it, the Q people.

So I’m just very honored. People ask how I’m taking this. I feel great, man. I’m a patriot, I’m a good father, I’ve told the truth, I love America, and the fact that this global enemy, controlled by the Communist Chinese, wants to pin this on me

Previous GOP Rep Who Voted For Impeachment: We Expect Attempts To Kill Us, We’re Buying Body Armor [VIDEO]
Next Junior In Hot Water Over 2016 Inaugural Spending