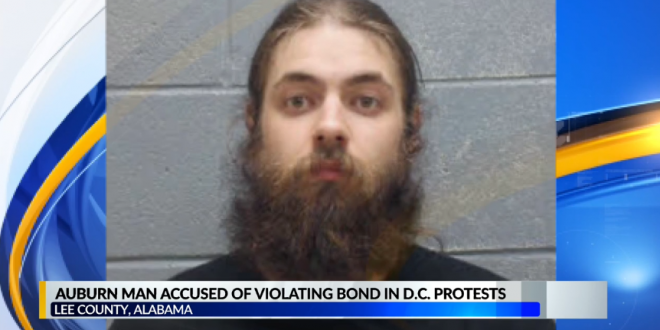 An east Alabama man who investigators say violated his bond in Lee County, Alabama by traveling to Washington to participate in the violent riot at the U.S. Capitol is in federal custody after agents located him at an Auburn home.

23-year-old William Watson of Auburn is believed to be the bearded man in the tan sweatshirt in an image released by Metropolitan Police Department.

According to an article by the Alabama Political Reporter, on Watson’s Instagram account, he regularly posted conspiracies related to the election and COVID-19. He claimed to have a disability that exempted him from wearing a mask at the Auburn restaurant Offers in one video.

CAPITOL RIOTS ARREST UPDATE:
*William Watson of Auburn, Ala., was taken into federal custody on Monday.
*Authorities say Watson, 23, violated his bond on a July 2 drug case when he traveled to DC to join mob that stormed the Capitol.https://t.co/MkcINa1CVD pic.twitter.com/PTviopncLS

eConoMIc anXieTy: William Watson, 23, of Auburn had been out on $103,000 bond in a drug trafficking case from July, but violated the terms of his bond banning him from leaving Alabama after he was spotted inside the U.S. Capitol during last week’s riots. https://t.co/UuBsnOlQkI