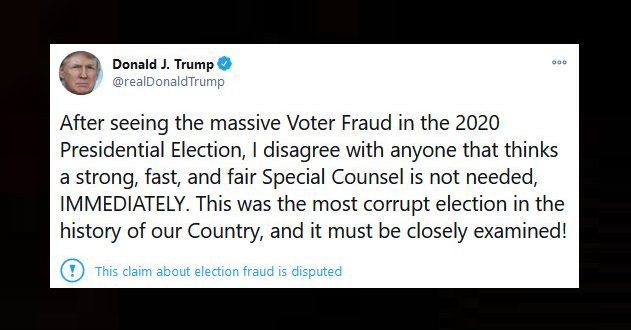 Hours after Bill Barr officially stepped down as Attorney General, President Donald Trump publicly called for a special counsel to look into the election results.

Trump is refusing to accept the reality that he lost, and as a result he’s been entertaining all sorts of baseless and conspiratorial claims of voter fraud.

Claims that, despite the Trump team’s repeated insistences on TV, they have been completely unable to prove in court after court. Even Trump-appointed judges have rejected their claims.

After seeing the massive Voter Fraud in the 2020 Presidential Election, I disagree with anyone that thinks a strong, fast, and fair Special Counsel is not needed, IMMEDIATELY. This was the most corrupt election in the history of our Country, and it must be closely examined!