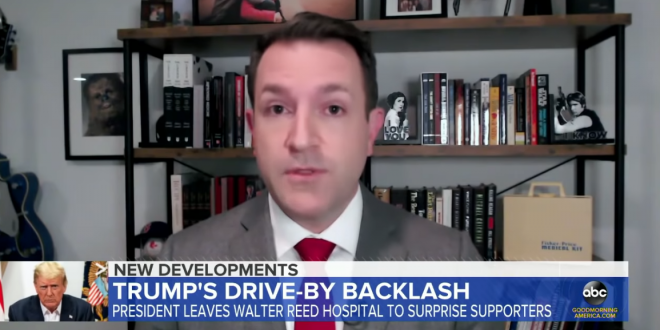 Dr. James Phillips, the emergency room physician who publicly criticized President Trump’s decision to drive with Secret Service agents to greet supporters while he was hospitalized with COVID-19 in October, has been removed from Walter Reed National Military Medical Center’s schedule starting in January.

Colleagues of Dr. Phillips were surprised that a disaster medicine specialist would be eliminated from the schedule at a busy military hospital at a time when Maryland is nearing a record high for COVID-19 hospitalizations.

TERRIBLE—Dr James Phillips, attending physician at Walter Reed who criticized Trump for joyriding w/ Secret Service agents to greet supporters while #COVID19 infected—just got notice his contract at Walter Reed will *not* be renewed. Dr Phillips is a hero. https://t.co/d0LA1JO3SF