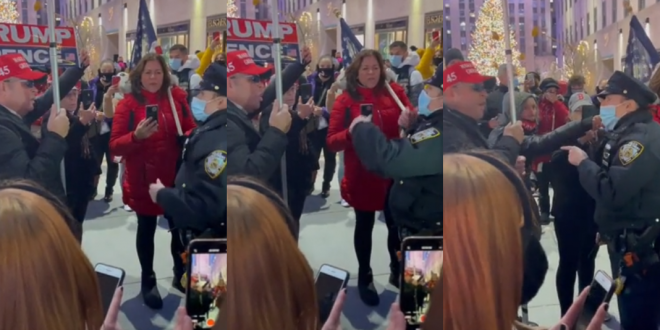 A loudmouth with a gigantic pro-police flag cursed out an NYPD cop in Rockefeller Center when the officer stepped in to settle a social-distancing dispute, according to cops and video. “Four years I had to put up with your shit!” the protester retorts as the cop steps in.

“I am talking!” the officer then bellows, briefly silencing everyone around her. “I don’t give a fuck,” the protester snaps back — gripping the pole to a large Thin Blue Line American flag waving over his head.

“Then get the fuck out of here,” the cop responds. “No! Don’t even think about it. Who the fuck are you,” the protester continues. “I’m the fucking police,” the visibly annoyed cop says. “Wow,” he responds. “Go get more, go get more.”

The man screaming at the cop is the infamous troll who has been banned from theme parks and sports stadiums around the country for unfurling Trump banners on their properties. He is sometimes seen kayaking down the Hudson towing a Trump flag to own all those Manhattan libs. As you can see below, he was part of a larger anti-lockdown protest.

Notorious Trump-loving fascist NYC troll Dion Cini cursed out an NYPD cop at Rockefeller Center while he was literally waving a big Thin Blue Line/Blue Lives Matter flag. People were concerned about Cini getting close to others while not wearing a mask. https://t.co/gmOWKJs6Ei

Crazy Trump supporter / Proud Boy in NYC threatens to “burn everything down” pic.twitter.com/dILnzDINJB