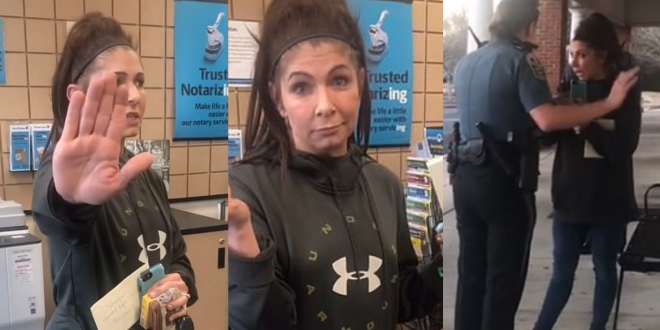 Originally shared on TikTok, the three videos show how the woman refused to mask up, then began a lengthy outburst while an onlooker recorded the incident all the way up to police arriving at the scene.

The woman can be seen talking at the bystander’s phone as one of the employees in the store (reportedly located in Georgia) asks her to leave or put on a mask.

The woman proceeds to tell the person filming to put their phone down, saying, “This is a private residence and actually I’m restricting your recording, and so therefore you are not allowed to do this.”

“The store had a 3 person limit at a time and there was a line outside. The store’s policy was also for all individuals to wear mask,” @asapvick wrote in the description of one of the videos.

The first video begins with the woman reading off of some paper in her hand. When the person behind the camera says she is holding up other customers, the woman turns and dismissively says the mailroom attendant is to blame for that.

When asked about her mask, she responds smugly: “I am not a conformer. Why are you wearing one?” She goes on to say she’s already had COVID-19, before yelling out for the manager.