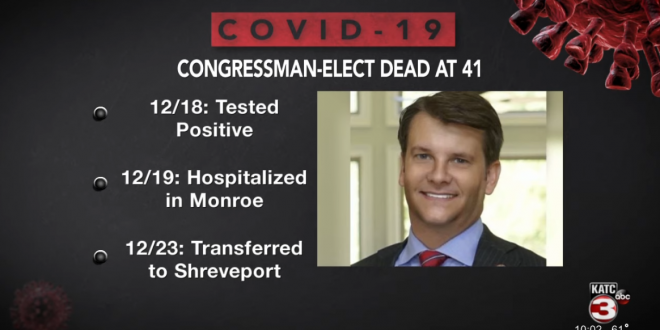 US House Rep-Elect Luke Letlow Dies Of COVID At 41

Luke Letlow, Louisiana’s incoming Republican member of the U.S. House, died Tuesday night from complications related to COVID-19 only days before he would have been sworn into office. He was 41.

“The family appreciates the numerous prayers and support over the past days but asks for privacy during this difficult and unexpected time,” Bautsch said in a statement.

Mr. Letlow was set to take office on Sunday. His death was confirmed by several politicians, including Representative Garret Graves of Louisiana, who said in a Facebook post that the death of his friend and “former co-worker” was “a huge loss to Louisiana and America.”

Mr. Bautsch said on Dec. 23. that Mr. Letlow had been receiving the antiviral drug remdesivir and steroids to treat his infection.

He did not have any underlying conditions that would have increased his chances of dying from Covid-19, Dr. G.E. Ghali, a doctor at the Shreveport hospital, told The Advocate in Baton Rouge, La.

The Republican Party of Louisiana praised Letlow as a “rising political star and a good friend” in a statement Tuesday evening. Louisiana Democratic Gov. John Bel Edwards ordered that flags in the state be flown at half-staff on the day of Letlow’s funeral.

Under Louisiana state law, a special election will now take place to elect someone to represent the state’s 5th Congressional District, which Letlow had carried in a runoff election earlier this month with 62% of the vote. The district is heavily Republican and encompasses much of eastern Louisiana.

Previous CHATTER AWAY: Overnight Open Thread
Next Mnuchin: $600 Checks Will Start To Go Out Tuesday