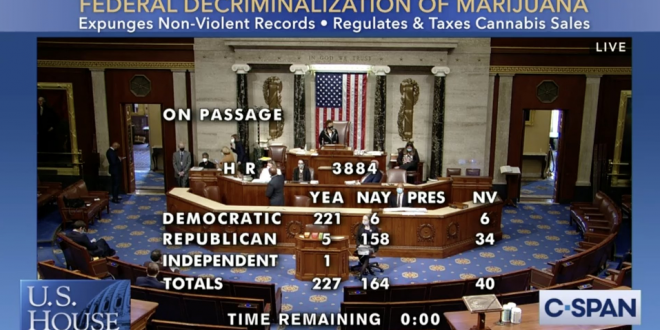 The U.S. House of Representatives approved a bill to federally legalize marijuana in a historic vote on Friday. It’s the day that cannabis reform advocates have been building toward for years—a full floor vote to end prohibition in a chamber of Congress.

Under the Marijuana Opportunity, Reinvestment and Expungement (MORE) Act, cannabis would be federally descheduled and those with prior convictions would have their records expunged. The descheduling provisions would be retroactive, too.

Despite the unprecedented House victory for reformers, few believe the legislation stands a chance in the Republican-controlled Senate, at least before the end of the current Congress early next month. Vice President-elect Kamala Harris (D-CA) is the lead sponsor of the Senate companion version of the bill.

In addition to descheduling and decriminalizing cannabis, the MORE Act creates a “Criminal Justice Office,” which will, among other things, create a grant program to provide job training and reentry services; and provide legal aid, including for the “expungement of cannabis convictions.”

The act places a 5% federal tax on the sale of cannabis products; that tax will then increase by 1% each year and cap at 8%, according to Congress members who spoke during the Dec. 4 full-floor U.S. House debate.

It also directs the Small Business Administration to create a “Cannabis Opportunity Program” that would “assist small business concerns owned and controlled by socially and economically disadvantaged individuals.”

Rep. Matt Gaetz was the only House GOP cosponsor.

The MORE Act has passed the House to #EndCannabisProhibition

50 years in the making. pic.twitter.com/yJ1V7tPiKK

Rep @ConorLambPA votes ‘no’ on the MORE Act

Illinois @RepLipinski also votes ‘no’ on the MORE Act.

Previous Pew Research: 60% Say They Will Get COVID Vaccine
Next Michele Bachmann “Seriously And Sincerely Cries Out” To God To Allow Trump To Have Second Term [VIDEO]