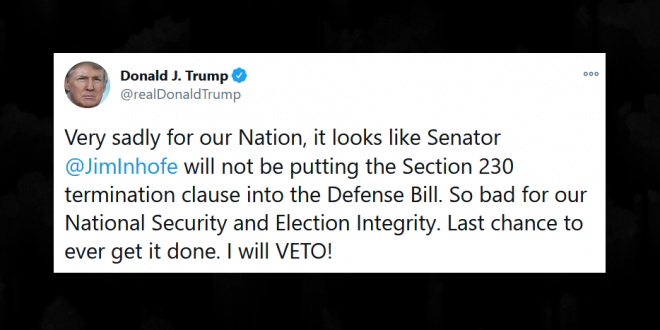 Donald Trump has doubled down on his threat to veto a $740 billion defense bill that does not include a repeal of protections for internet companies.

It is not clear exactly why Mr Trump considers Section 230 a national security issue, or why he believes a rule relating to speech on internet platforms should be included in a military spending bill, but last week he branded Twitter a national security threat after the hashtag #DiaperDon began spreading on the platform.

The bill passed in both chambers with a veto-proof majority, but that may not hold up with Republicans so utterly terrified of reprisals from the cultists.

Very sadly for our Nation, it looks like Senator @JimInhofe will not be putting the Section 230 termination clause into the Defense Bill. So bad for our National Security and Election Integrity. Last chance to ever get it done. I will VETO!