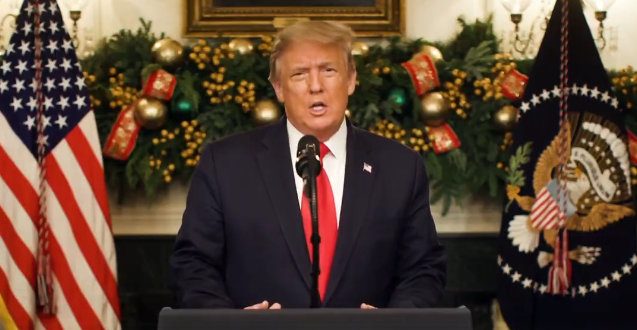 President Donald Trump, in a stunning Tuesday night tweet, called the $900 billion Covid relief bill passed by Congress an unsuitable “disgrace” and urged lawmakers to make a number of changes to the measure, including bigger direct payments to individuals and families.

The relief legislation passed by Congress on Monday was negotiated in part by a senior Trump administration official, Treasury Secretary Steven Mnuchin. Trump himself had been absent from the talks since before the election. Lawmakers went home for the holidays after passing the bill.

As if 2020 hasn’t delivered enough unexpected news, consider this: President Trump’s call Tuesday night for Congress to raise coronavirus stimulus payments to Americans to $2,000 won raves from at least three of his harshest critics.

House Speaker Nancy Pelosi, U.S. Rep. Alexandria Ocasio-Cortez and U.S. Sen. Bernie Sanders all favored the president’s proposal for $2,000 direct payments over the $600 that Congress has suggested in its $900 billion plan.

Weird. It’s almost as if we had already wanted to do this but weren’t able to because @senatemajldr blocked it. https://t.co/Z0KFBNIHCN

Republicans repeatedly refused to say what amount the President wanted for direct checks. At last, the President has agreed to $2,000 — Democrats are ready to bring this to the Floor this week by unanimous consent. Let’s do it! https://t.co/Th4sztrpLV