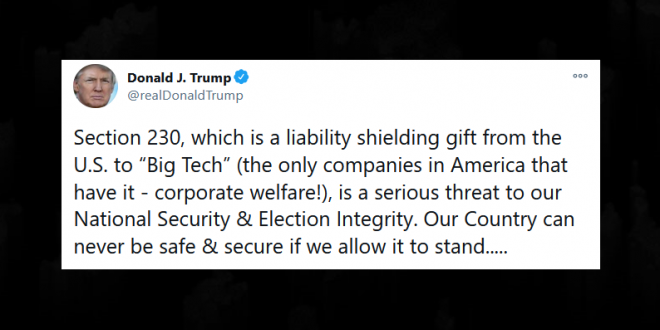 President Donald Trump threatened to veto must-pass defense policy legislation on Tuesday unless lawmakers agree to repeal a legal shield for social media companies, a move that one senior House staffer called “a total non-starter” for Democrats. Trump’s push to repeal the protections, known as Section 230, has become the most contentious remaining issue in talks on the National Defense Authorization Act. The president ratcheted up the pressure on Congress in a pair of tweets Tuesday night.

The latest curveball from Trump comes as lawmakers rush to clinch a compromise defense bill this week. Democrats will almost certainly reject Trump’s demand of a total repeal of the online protections. The House and Senate passed their versions of the defense bill with enough bipartisan support to overcome a potential veto. It’s unclear if those margins would hold up if Trump followed through on the threat.

Section 230, which is a liability shielding gift from the U.S. to “Big Tech” (the only companies in America that have it – corporate welfare!), is a serious threat to our National Security & Election Integrity. Our Country can never be safe & secure if we allow it to stand…..

…..Therefore, if the very dangerous & unfair Section 230 is not completely terminated as part of the National Defense Authorization Act (NDAA), I will be forced to unequivocally VETO the Bill when sent to the very beautiful Resolute desk. Take back America NOW. Thank you!

Trump is threatening to veto a must-pass defense bill because he can’t lie on Twitter.

You can’t make this shit up.

What was trending on twitter about Trump that led him to say tonight that he's going to veto all military funding unless Congress gets rid of "national security" issue of people not being able to sue platforms like twitter for what users post? It's not still #DiaperDon is it?