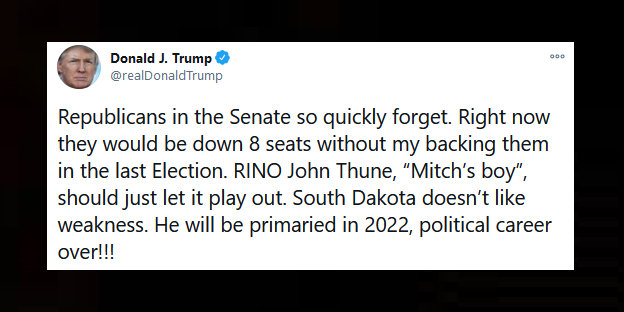 President Trump went after Sen. John Thune (R-S.D.) on Tuesday as he put pressure on GOP senators to back efforts to challenge the Electoral College vote when Congress meets on Jan. 6.

The president lashed out at Senate Republicans on Twitter, claiming that they would have lost seats without his endorsement. Trump also suggested that Thune, the No. 2 Senate Republican, would be “primaried in 2022.”

The tweet comes after Thune said that efforts to object to the Electoral College vote would “go down like a shot dog” in the Senate.

Republicans in the Senate so quickly forget. Right now they would be down 8 seats without my backing them in the last Election. RINO John Thune, “Mitch’s boy”, should just let it play out. South Dakota doesn’t like weakness. He will be primaried in 2022, political career over!!!