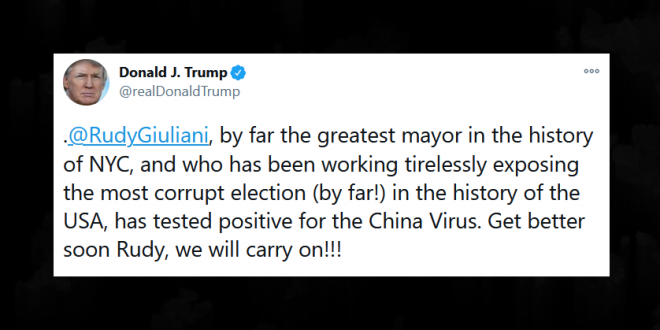 Rudy Giuliani, the former mayor of New York, has tested positive for coronavirus, according to US President Donald Trump. Mr Giuliani has been at the forefront of Trump’s efforts to discredit the results of the presidential election which was won by Joe Biden.

He is now a close aide of the outgoing president and has been spreading unfounded conspiracy theories about widespread voter fraud. Giuliani has held multiple hearings in recent days and has not been seen wearing a mask. His son, who is a White House staffer, tested positive last month.

.@RudyGiuliani, by far the greatest mayor in the history of NYC, and who has been working tirelessly exposing the most corrupt election (by far!) in the history of the USA, has tested positive for the China Virus. Get better soon Rudy, we will carry on!!!

After testing positive for Covid-19, Rudy Giuliani filed a lawsuit with the lab demanding the results be overturned.