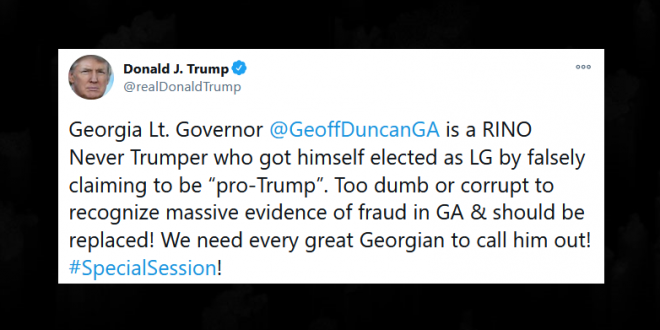 President Donald Trump, desperately ramping up his attacks on allegedly disloyal Republicans as his electoral defeat looms ever larger, lashed out at Georgia’s Republican lieutenant governor, Geoff Duncan, on Monday night and said he “should be replaced.”

That moment came one day after Duncan unequivocally declared “Joe Biden is going to be sworn in as the 46th president” during an appearance on CNN’s Sunday morning news show State of the Union.

Georgia Lt. Governor @GeoffDuncanGA is a RINO Never Trumper who got himself elected as LG by falsely claiming to be “pro-Trump”. Too dumb or corrupt to recognize massive evidence of fraud in GA & should be replaced! We need every great Georgian to call him out! #SpecialSession!

“Georgia is not the only state that pushed through these last minute rules changes before the presidential election.” @marthamaccallum They forgot about our Constitution!

RINOS @BrianKempGA, @GeoffDuncanGA, & Secretary of State Brad Raffensperger, will be solely responsible for the potential loss of our two GREAT Senators from Georgia, @sendavidperdue & @KLoeffler. Won’t call a Special Session or check for Signature Verification! People are ANGRY!